“I didn’t want the neighborhood to become a Ferguson”: Lawyer Helped Leak Ahmaud Arbery Video To Avoid Tension Between The Races

He said he downloaded the video to a thumb drive before McMichael delivered the drive to the station; the exact date of that delivery isn’t known though the video went public in early May.

The person who leaked the infamous video of the incident was one of the men charged in the shooting death of South Georgia resident Ahmaud Arbery.

To stop rumors about the incident that were circulating through the community, Gregory McMichael gave the video to Brunswick-area attorney Alan Tucker. Tucker told WSB-TV he helped McMichael deliver the footage to a radio station because he was afraid the shooting would cause tension between the races.

“I didn’t want the neighborhood to become a Ferguson,” said Tucker, who reportedly has known McMichael for roughly three decades in a professional capacity. He said he downloaded the video to a thumb drive before McMichael delivered the drive to the station; the exact date of that delivery isn’t known though the video went public in early May.

Arbery died on February 23 after he was shot twice during a confrontation with McMichael’s son Travis. He was out on a jog when he encountered the McMichaels, who later claimed Arbery fit the description of a burglar and they were trying to make a citizen’s arrest. Travis McMichael, who was armed with a shotgun, told authorities he acted in self-defense.

The father-son duo was arrested on May 7 and charged with murder and aggravated assault. Tucker believes Gregory McMichael leaked the video because he wanted to prove he is not racist.

“[Greg] wanted the public to know the truth,” Tucker told NBC News. “That he and his son were not white supremacists driving in a pick-up truck with a confederate flag in the back who shot a black man in the back because he was jogging in a white neighborhood.”

Tucker added, “He hoped the public would see them trying to make a citizen’s arrest on a young man that was running from a home under construction — that he had been seen in at night on several occasions while he plundered around on the owner’s security camera.”

“The truth will reveal that this is not just another act of violent racism,” Hogue said during a press conference. “Greg McMichael did not commit murder.”

“He had that tape by himself. He delivered it,” Stewart said. “We have questions about the length of it.”

Lee Merritt, another Arbery family attorney, is also skeptical. Before his death, Arbery was caught on tape inside a home that was under construction. Larry English, owner of the home, received a text message from law enforcement, who recommended he contact Gregory McMichael if he needs help. Elizabeth Graddy, English’s attorney, shared the message with NBC News.

“Your neighbor at (redacted address) is Greg McMichael,” the message stated. “Greg is retired Law Enforcement and also a Retired Investigator from the DA’s office. He said please call him day or night when you get action on your camera. His number is (redacted number).”

Merritt expressed that the text message proves the elder McMichael overestimated his authority.

Said Merritt: “If you take Gregory McMichael’s actions in releasing this video to the public with the knowledge that law enforcement told the homeowner to contact him if there was any issue, then you sort of begin to see that it’s possible that he believed that he was operating according to what police officers had given him the authority to do.”

Smartphone Spyware: It’s Scary What Your Phone Can Do Without You Ever Knowing…

Smart phones are growing in popularity. Similar to a mini computer, there are so many conveniences that come…
byTanya Phillips 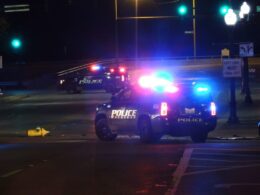 Officials have not offered details about why the vehicle was considered suspicious. Williams’ family has said the couple was outside of her mother’s home.
byBien Luigi

Healthcare and its cost is a limiting factor when it comes to the adoption of a balanced lifestyle.
byTUT Staff