The U.S. is essentially rejecting to agree if China, while in control of Tibet, moves to pinpoint the next reincarnation of His Holiness.

The foreseeing of announcing the bill did not go over too well, largely because Nancy Pelosi described $600 per adult as “significant.”

This definitely wasn’t the best look for the legislation given the comment comes from a multi-millionaire. When people started probing into the bill even further, on thousands and thousands of pages into the document, they get confused over the Dalai Lama getting some face time.

This is an unexpected and somewhat strange development on page 5099.

It’s absolutely real, as is the portion that seeks to make illegal streaming into a felony. The streaming portion of the bill fits in pretty flawlessly with other defenses drawn in the bill because the pandemic has only heightened the prominence of streaming to the bottom line of studios, labels, and artists.

However, it feels like it’s more than a little bit out-of-context to see the U.S. government adding a portion about the Dalai Lama reincarnation process. The U.S. is essentially rejecting to agree if China, while in control of Tibet, moves to pinpoint the next reincarnation of His Holiness.

Stranger things have certainly happened in the midst of enormous, much debated funding bills from Congress. That’s only to be expected when two warring sides negotiate into oblivion: “Peak government.”

The number of confirmed coronavirus cases in the United States has topped 1 million and the deaths toll has surpassed the total of US troop fatalities during the Vietnam War.
byBien Luigi

It looks like protesters are not going to stop soon as justice isn't served enough.
byBien Luigi 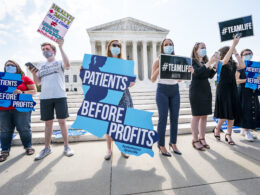