The Zika Virus: Cause, Prevention, and Treatment

Three Britons have recently contracted the Zika virus, which may cause severe birth defects.

Zika virus is spread to people through mosquito bites. The Aedes aegypti mosquito, to be exact, which also carries dengue fever and yellow fever. The most common symptoms of Zika virus disease are fever, rash, joint pain, and conjunctivitis (red eyes). The illness is usually mild with symptoms lasting from several days to a week. Severe disease requiring hospitalization is uncommon.

It was first discovered in Africa in the 1940s but is now spreading in Latin America. Outbreaks of the virus have occurred in areas of Africa, Southeast Asia, the Pacific Islands, and the Americas. Because the Aedes species mosquitoes that spread Zika virus are found throughout the world, it is likely that outbreaks will spread to new countries. In December 2015, Puerto Rico reported its first confirmed Zika virus case. Locally transmitted Zika has not been reported elsewhere in the United States, but cases of Zika have been reported in returning travelers.

There is no vaccine to prevent or medicine to treat Zika. While Zika virus can lead to fever and a rash, most people show no symptoms. Travelers can protect themselves from this disease by taking steps to prevent mosquito bites. When traveling to countries where Zika virus (see map) or other viruses spread by mosquitoes have been reported, use insect repellent, wear long sleeves and pants, and stay in places with air conditioning or that use window and door screens.  All travelers are cautioned to follow strict precautions to avoid mosquito bites.

The virus is not contagious. The only way to fight Zika is to clear stagnant water where mosquitoes breed, and to protect against mosquito bites. 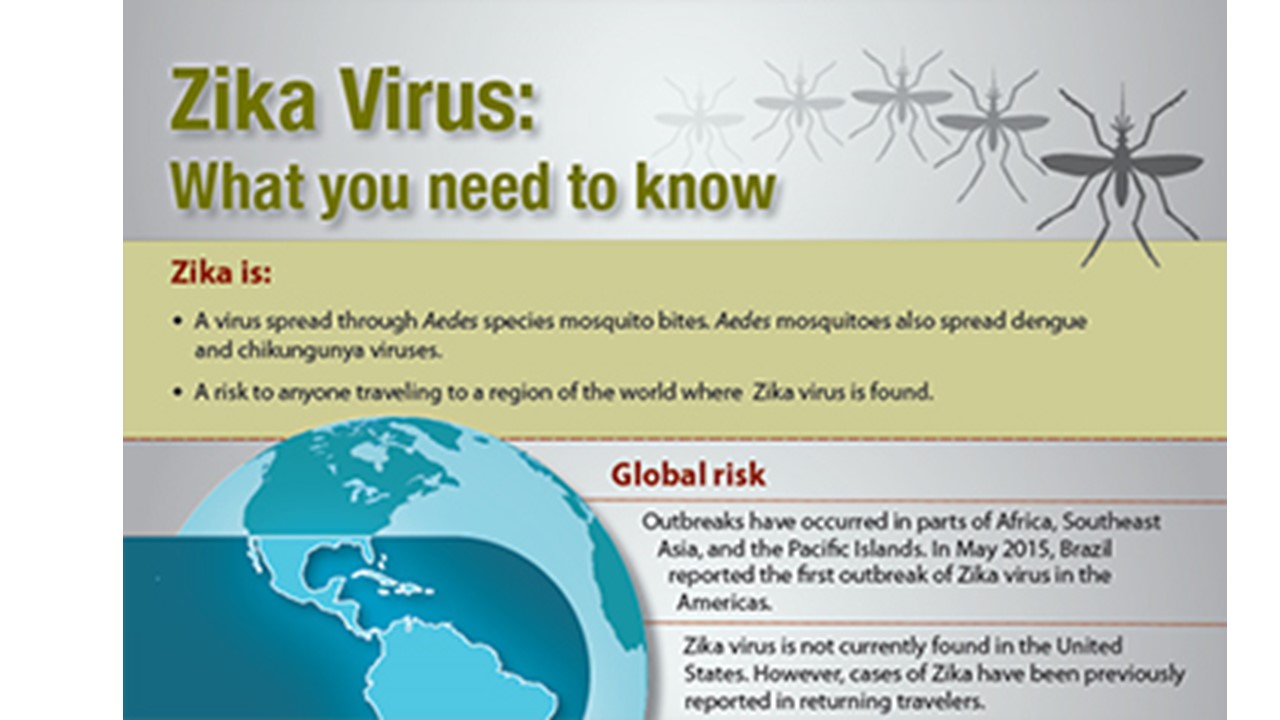 Alarmed at the surge of Zika virus in the Americas, the U.S. government has launched an effort to develop a vaccine.

“We’re already starting on it,” says Dr. Anthony Fauci, director of the National Institute of Allergy and Infectious Diseases. But while workers at the institute’s Vaccine Research Center are armed with lessons learned from working to counter West Nile virus, chikungunya virus and dengue fever, Fauci says developing a vaccine for Zika will require “an extensive research and development effort.

“The consequences of becoming infected are so dire, researchers say, that developing a vaccine must be an urgent priority. “Everywhere and anywhere there’s vulnerability, there’s pressure for a vaccine,” Fauci says.

“No matter how you slice it, with a twentyfold increase in microcephaly – to 3,800 cases at last count – that’s a serious issue,” Fauci says. “We’ve got to do something about it.”

In addition, the virus appears to be linked to a rise in a nerve ailment called Guillain-Barre syndrome that causes paralysis in adults.

Officials in four Latin American and Caribbean nations have cautioned women to avoid pregnancy amid concerns over Zika virus, causing severe birth defects. Meanwhile, US health authorities have warned pregnant women to avoid travelling to more than 22 countries in the Americas and beyond, where Zika cases have been registered.  This number was updated on Friday.

Colombia, Ecuador, El Salvador and Jamaica recommended to delay pregnancies until more was known about the mosquito-borne Zika virus. Health Minister Alejandro Gaviria urged women to delay pregnancies for up to eight months. This was implemented following an outbreak in Brazil.

“We are doing this because I believe it’s a good way to communicate the risk, to tell people that  there could be serious consequences,” he was quoted as saying by Reuters.

However, women’s rights campaigners criticized the recommendations, saying women in the region often had little choice about becoming pregnant.

“It’s incredibly naïve for a government to ask women to postpone getting pregnant in a context such as Colombia, where more than 50% of pregnancies are unplanned and across the region where sexual violence is prevalent,” said Monica Roa, a member of Women’s Link Worldwide group.

Brazil reported the number of babies born with suspected microcephaly, a condition that involves a small cranium and brain and can lead to lifelong cognitive impairment had reached nearly 4,000 since October.

The link between microcephaly and Zika has not been confirmed – but a small number of babies who died had the virus in their brain and no other explanation for the surge in microcephaly has been suggested.

With a handful of Zika infections reported in travelers returning to the United States and with others undergoing testing, some U.S. public health officials are concerned that the virus may gain a toehold in the country. The most likely locations are along the Gulf Coast and in Florida, though Fauci and others say an extensive spread is unlikely.

“We’re unlikely to have serious local spread,” Fauci says. “This is very similar to dengue, where it laps at our shores, people get infected in other regions and come back to the United States. Will local cases turn into major outbreaks? I don’t think so. There have been millions of cases of dengue in South America and the Caribbean for years and years.”
That doesn’t mean, Fauci says, that the U.S. shouldn’t be concerned, because two mosquitoes that carry Zika – Aedes aegypti and Aedes alopictus mosquitoes – are found in the Southeast, and local outbreaks may occur. “I think we’re very likely to see a large number of imported cases as a lot of people go to South American and the Caribbean and come home,” he says.

The virus spreading globally is a real possibility, says Waleed Al-Salem, a researcher at the Liverpool School of Tropical Medicine and an adviser on insect-borne diseases to the Saudi Arabia Ministry of Health. Aedes aegypti mosquitoes, he says, are widely distributed in Southeast Asia, southern India, Pakistan, most African countries, the Arabian Peninsula, southern Europe and most Latin American countries.

Either the mosquito or an infected traveler can carry the virus to another country, and opportunities for global transmission abound. Next month, Carnival celebrations begin in Brazil, which typically are a major draw for globe-trotting travelers. This summer, Brazil is to host the Olympics. In eight months, millions of Muslim travelers from around the world – including from Latin America – will converge in Mecca, Saudi Arabia, for the annual hajj pilgrimage.

“Every year, 2 to 3 million people travel to Mecca,” Al-Salem says. “Some of them may have Zika.”  He notes the Saudi Ministry of Health takes precautions to prevent obviously ailing hajj pilgrims from infecting others and steps up mosquito-control efforts.

“Mosquito control is extremely important. If you don’t get bitten, you don’t get Zika,” says Dr. Stanley Plotkin, professor emeritus at the University of Pennsylvania and developer of the rubella vaccine.

The rapidity of Zika’s spread, Plotkin says, suggests there’s a significant amount of virus in an infected person’s blood. “That means a mosquito biting someone is very likely to become infected and transmit the virus to others,” he says.
Yet mosquito control is only part of the solution, given how widely the insects breed and how difficult it is to wipe them out. A vaccine offers a more permanent solution, Plotkin says, but developing one will likely take years. Many scientific questions must be answered first.

Big pharmaceutical companies so far have announced no plans to develop a vaccine. Merck – maker of a measles, mumps and rubella vaccine, among others – did not respond to a request for comment. And so far, pharmaceutical giant Pfizer is “not in the hunt for Zika,” spokesman Dean Mastrojohn says.

The National Institute of Allergy and Infectious Diseases also plans to boost funding to Brazilian grantees to jump-start research efforts. “That’s the fastest way to get them to work on diagnostics and vaccines,” Fauci says. “We need better diagnostics so that women who are pregnant will know, and not have to guess, whether they’re infected.”

Teen Wouldn’t Snitch On His Own Murderer

As everyone knows by now, there’s a lil’ movement called “Stop Snitching!” and I’m not going to take…
byBrennen Jones

Martin Luther King Day: I Have a Dream

"I have a dream..."
byBrennen Jones

Corona Beer in Mexico Halts Production Due To Coronavirus

The official death toll in Puerto Rico has been severely underestimated.
byTUT Staff