How Americans Are Gradually Changing Their Lifestyle

Americans have developed a pretty harsh reputation for being unhealthy over the years. High-fat diets have certainly led to an obesity crisis, but now it seems many are keen to change their unhealthy ways.

Americans have developed a pretty harsh reputation for being unhealthy over the years. High-fat diets have certainly led to an obesity crisis, but now it seems many are keen to change their unhealthy ways.

Data shows Americans are starting to gradually change their lifestyle, in turn reducing the rates of serious illnesses such as cancer, heart disease, and Diabetes. Here, we’ll look at some of the changes Americans are making and the effect it’s having on their health.

Better food education is starting to alter the American Diet

Although obesity is still a problem in America, small changes are starting to have big results. In a recent poll carried out earlier this year, the majority of Americans felt they had a healthy diet. However, this simply didn’t add up to the obesity levels in the country. It was discovered, the problem wasn’t what people were eating, it was how much.

This research has helped highlight the need for better food education; something which is now being implemented. As Americans become more aware of correct portion sizes, obesity levels will start to fall.

Many Americans have also started to develop a more active lifestyle. For example, in a bid to not only get fitter but help the environment too, many people are now opting for greener transportation choices. Bicycling has become particularly popular, with sales of folding bikes from companies such as Brompton, rising significantly.

More people than ever are choosing to take up cycling either as a cheaper and healthier way to get to work or as a hobby. Folding bikes are especially popular in city areas where space is limited.

It’s not just cycling either. Americans are taking up all kinds of healthier activities such as Yoga, Pilates and running. So, this combined with better food education is helping the country to get fitter.

The only concern highlighted by the most recent research is that it’s the richer population who are becoming the healthiest. It appears the poorer population simply cannot afford the very best healthcare and a stricter, healthy diet. So, if the health levels in the country are going to significantly improve, more help does need to be made available to the poorer communities.

Overall, Americans are starting to make much healthier choices and that’s largely down to improved education. There’s still a long way to go, but progress so far is proving promising.

How To Reduce Debit And Credit Errors With Two Simple Clicks

Ways to Renovate your Businesses Exterior

Think order your prescriptions on line is complicated and risky? Find out how easy it can be when…
byJonah Carte

An Army veteran who was severely injured in a bombing just received a penis transplant and is expected to make a full recovery.
byBrennen Jones 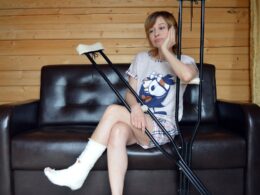 Common Types of Medical Malpractice Injuries to Be Aware Of

Healthcare practitioners are sometimes to blame for so many cases of disability, death, and medical suffering. In medical…
byTUT Staff

Planning Plastic Surgery? Here’s What You Should Know About Recovery

Summer is the season for plastic surgery, as people take advantage of their vacation days to have procedures done – but having plastic surgery isn’t as simple as just taking a few days off from work.
byTUT Staff